How to Make Drinkable Water Out of Thin Air

California is drying up. Its current drought is ringing alarm bells across the state and the country, but it is far from being alone globally in facing water shortages.

Developed economies such as California already rely on sophisticated irrigation systems to utilize what sources it has. But what’s needed now are even smarter, 21st-century solutions.

One constantly evolving technology is desalination, which is being deployed successfully around the world, even as engineers work toward better systems that will use less energy.

Netherlands-based Dutch Rainmaker BV has come up with an alternative, and novel, solution to water shortages. The company, with partners in Canada and other countries, has developed a technology that can deliver water out of thin air. Its technology uses wind turbines to conjure up H20, in some cases with no access to any inflowing sources.

The company’s air-to-water system, called AW75, is already operating in extreme desert conditions in Kuwait and in the cooler Netherlands. It works without access to the power grid, with minimal operation and maintenance and no waste.

“We combine technologies that are already known,” says Piet Oosterling, Rainmaker’s founder and Chief Technology Officer. The system deploys the wind via a turbine, but instead of generating electricity it creates thermal energy to cause condensation. It works because air always contains a certain amount of water, though this varies according to temperatures and humidity. When it’s 20 degrees Celsius and the relative humidity is at 50 per cent, the air contains about seven grams of water per cubic metre of air. If the temperature climbs to 30 at the same humidity, the amount of water doubles.

“The air-to-condensation process effectively heats and cools the air to the dew point. It basically creates condensation and makes it rain,” says Michael O’Connor, Rainmaker Worldwide’s Peterborough, Ont.-based CEO. The condensed droplets are collected into a storage compartment.

The heart of the air-to-water unit is the device’s wind-fed power unit. Inside the nacelle at the top of the tower there’s a proprietary compressor (heat pump). The system converts wind energy to thermal power, which, in turn, feeds the water production unit attached to the tower. The turbine forces air through a heat exchanger, cooling the air and forming condensation. When the temperature falls below its dew-point, water droplets will form. These are collected in a water storage compartment.

The company’s prototypes in Kuwait and the Netherlands each produce an average 7,000 litres per day of water. The unit in Kuwait has managed to produce 8,700 litres a day at temperatures of 28 degrees and 40 per cent relative humidity.

The company will not say where else it is testing the technology – there is a French company testing a rival system – but says it has potential in countries such as Saudi Arabia, China, Indonesia and India. 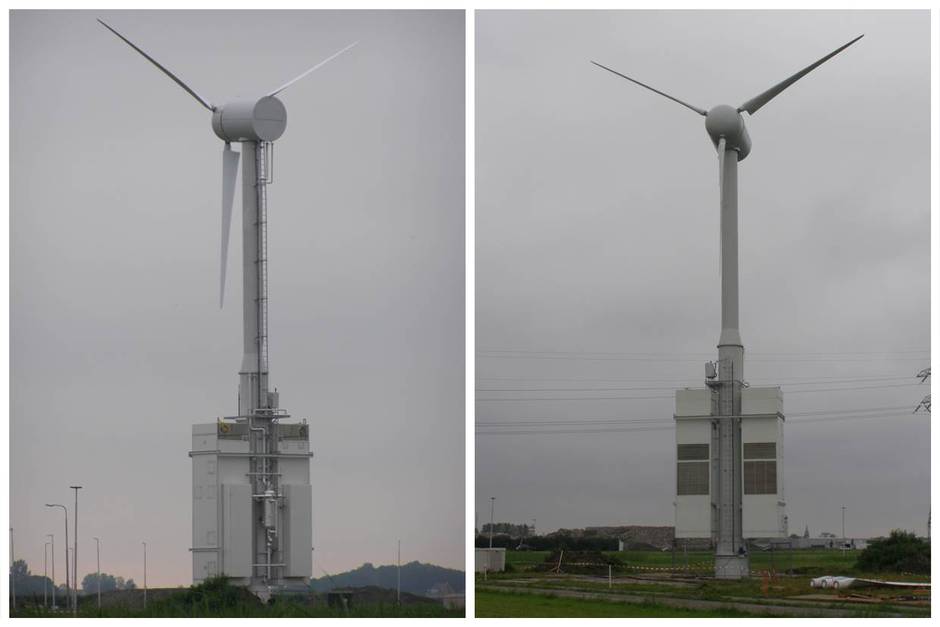 Prototypes of the air-to-water system are installed in both Kuwait and the Netherlands. (DUTCH RAINMAKER)

Read the full article “How to Make Drinkable Water Out of Thin Air” by the Globe and Mail on GE Reports here.