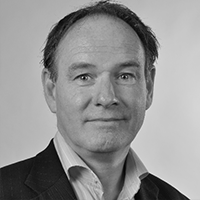 Mr. Dessing joined the Dutch Rainmaker team in 2014 as Chief Technology Officer, one year prior to the launch of Rainmaker Worldwide Inc.  He is responsible for the technical development and IP strategy.

Prior to joining Rainmaker, Dessing founded Craftworks B.V., a company focused on product development active in the vending equipment industry with customers such as Coca-Cola, Danone, and Heineken. The primary focus for Craftworks has always been a short “time-to-market” with a strong combination of mechanical engineering, software development and patent matters.

Dessing has been active in product development in electrical engineering, for over 25 years.  In 1988, a hardware and software engineer with Vicon, Dessing was tasked to develop an automatic milking system for cows. After a strategic reorientation within Vicon, Prolion was founded to further develop the product. His work on this innovation led to his taking on greater responsibility within the company and he was promoted to leadership positions such as Director of R&D, CTO and COO.