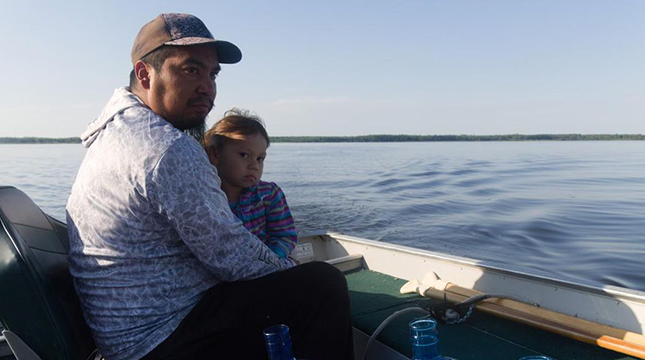 NORTHWEST ANGLE 33 FIRST NATION, ONT.—Jonathan Mallet lies on the frozen surface in the Lake of the Woods.

Moments before, his quad vehicle had flipped him and his sled carrying water jugs onto a thin sheet of ice. With each movement, the water rises from the cracks beneath him.

As he had done most days for years, often with his fiancée and four-year-old daughter, Mallet had been carting dozens of blue jugs filled with clean water from Kenora, Ont., to Angle Inlet in Northwest Angle 33, his isolated reserve in the Lake of the Woods — a community that has relied on bottled water since 2011 because of a long list of water contamination, from E. coli to radionuclides.

It is eight hours there and back often through hostile terrain where there are no roads, only the lake. In the winter, the path takes him over ice, bringing its own risks.

Together, Mallet, his wife and child make an average of up to five trips a week, working through holidays, blizzards and storms. Four-year-old Alessa has been helping haul water as long as she has been alive.

The water haul follows a maze of summer and winter routes. In winter, the quad and a sled are driven across the frozen lake. In summer, the family typically boats across the lake to reach a delivery van parked in Minnesota. A series of dirt roads criss-crosses the international border twice before leading to the company in Ontario that sells them clean water.

In the last few years, they have done this more than a thousand times.

“We (will) drink clean water because I won’t let us drink anything else,” Mallet says. “We are a dying breed.”

In February 2019, Northwest Angle 33 received $9.7 million for a water treatment plant as part of the federal government’s commitment to end long-term drinking water advisories in Indigenous communities by 2021.

But the promise of sustainable clean, drinkable water remains theoretical. A lack of infrastructure — from roads to equipment — has undermined construction projects as it has in many remote communities where First Nations have the longest-standing drinking water advisories. Lack of roads, in particular, means many infrastructure projects, including water treatment plants are delayed, incomplete or go unrepaired for great lengths of time.

“I’m angry with the government for ignoring our requests for a road,” says Northwest Angle 33 Chief Darlene Comegan. “Every construction project we have is incomplete due to delivery delays of materials.”

Even once built infrastructure means the maintenance of water systems will be challenging if not, sometimes, impossible.

“Many First Nations have infrastructure needs and requests for funding across the region greatly outweigh the total allocated budget, currently by over $2 billion,” says Rola Tfaili, a media relations officer for Indigenous Services Canada.

In Northwest Angle, a once thriving community of hundreds has gradually dwindled to a few dozen people amid three long-term drinking water advisories. In the remote Indigenous communities of Lake of the Woods, this is what access to clean drinking water looks like.

On that October day in 2017,​ Mallet, travelling alone, had been delivering clean water to his community near the Manitoba-Minnesota border all day. By the time his quad had flipped him, the sun had set. He sat on the ice clinging to his sled.

Beside him, 1,000 pounds of bottled water lay scattered. His 500-pound quad was tipped on its side.

His foot was pinned under the quad and he was sinking into the lake, the same lake that had claimed the lives of his grandfather, several cousins, and his uncle Rick, whose house he now lives in with Alessa and his fiancée Victoria.

During the winter freeze-up, he usually only hauls small shipments across the lake to avoid sinking. But the stock in the community hall was running low and he had decided to take more than normal.

Mallet eventually unpinned his foot and flipped the quad upright with a thud that caused more water to swamp the ice. Then he piled the water jugs back onto the sled, feeling the ice see-saw beneath him. He made it to land as the ice crackled and caved in behind him. He arrived home safely at midnight.

Funding for the construction of the treatment plant was approved Jan. 27. The community then awarded work to a contractor, who lugged equipment across the lake last month.

A plan for roughly eight people — Mallet’s father among them — to cut down trees and clear a safe path to an old logging road five kilometres away was abandoned, because the muskeg was too soft and the window of opportunity had closed, said Norma Girard, a band councillor for the First Nation.

Project manager Sean Petrus, of Colliers Project Leaders, which is part of the consulting team, says construction is also challenged because of the limited materials available in the community for construction and road maintenance. And the community lacks a reliable power source and experiences intermittent power interruptions.

Whether or not the water treatment plant, once built, can stay functional is another question.

“Climate change has effects on timing. Without an all-access road, everything costs more. I cannot reiterate more why a road is most important.”

Photo Credit: Retrieved from The Star