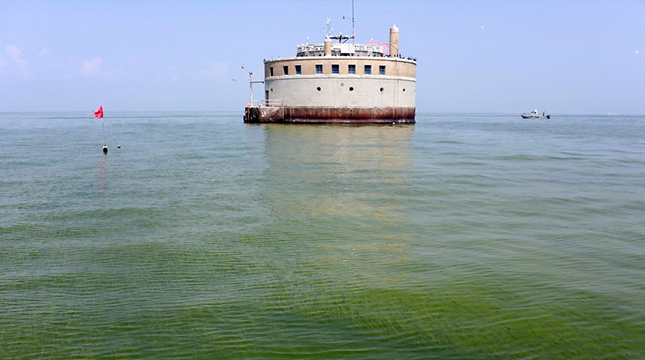 “Do Not Drink/Do Not Boil” is not what anyone wants to hear about their city’s tap water. But the combined effects of climate change and degraded water quality could make such warnings more frequent across the Great Lakes region.

A preview occurred on July 31, 2014, when a nasty green slime – properly known as a harmful algal bloom, or HAB – developed in the western basin of Lake Erie. Before long it had overwhelmed the Toledo Water Intake Crib, which provides drinking water to nearly 500,000 people in and around the city.

Tests revealed that the algae was producing microcystin, a sometimes deadly liver toxin and suspected carcinogen. Unlike some other toxins, microcystin can’t be rendered harmless by boiling. So the city issued a “Do Not Drink/Do Not Boil” order that set off a three-day crisis.

Local stores soon ran out of bottled water. Ohio’s governor declared a state of emergency, and the National Guard was called in to provide safe drinking water until the system could be flushed and treatment facilities brought back on line.

The culprit was a combination of high nutrient pollution – nitrogen and phosphorus, which stimulate the growth of algae – from sewage, agriculture and suburban runoff, and high water temperatures linked to climate change. This event showed that even in regions with resources as vast as the Great Lakes, water supplies are vulnerable to these kinds of man-made threats.

As Midwesterners working in the fields of urban environmental health and climate and environmental science, we believe more crises like Toledo’s could lie ahead if the region doesn’t address looming threats to drinking water quality.

The Great Lakes together hold 20% of the world’s surface freshwater – more than enough to provide drinking water to over 48 million people from Duluth to Chicago, Detroit, Cleveland and Toronto. But human impacts have severely harmed this precious and vital resource.

In 1970, after a century of urbanization and industrialization around the Great Lakes, water quality was severely degraded. Factories were allowed to dump waste into waterways rather than treating it. Inadequate sewer systems often sent raw sewage into rivers and lakes, fouling the water and causing algal blooms.

Problems like these helped spur two major steps in 1972: passage of the U.S. Clean Water Act, and adoption of the Great Lakes Water Quality Agreement between the United States and Canada. Since then, many industries have been cleaned up or shut down. Sewer systems are being redesigned, albeit slowly and at great cost.

The resulting cuts in nutrient and wastewater pollution have brought a quick decline in HABs – especially in Lake Erie, the Great Lake with the most densely populated shoreline. But new problems have emerged, due partly to shortcomings in those laws and agreements, combined with the growing effects of climate change.