2°C: BEYOND THE LIMIT: This giant climate hot spot is robbing the West of its water 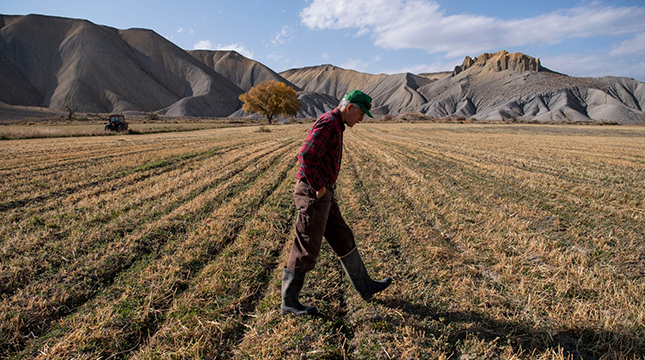 ORCHARD CITY, Colo. — On New Year’s Day in 2018, Paul Kehmeier and his father drove up Grand Mesa until they got to the county line, 10,000 feet above sea level. Instead of the three to five feet of snow that should have been on the ground, there wasn’t enough of a dusting to even cover the grass.

The men marveled at the sight, and Kehmeier snapped a photo of his dad, “standing on the bare pavement, next to bare ground.”

Here, on Colorado’s Western Slope, no snow means no snowpack. And no snowpack means no water in an area that’s so dry it’s lucky to get 10 inches of rain a year. A few months after taking the photo, Kehmeier stared across the land his family had tilled for four generations and made a harsh calculation: He could make more money selling his ranch’s water than working his land.

A 20-year drought is stealing the water that sustains this region, and climate change is making it worse.

“In all my years of farming in the area, going back to about 1950, 2018 was the toughest, driest year I can remember,” said Paul’s father, Norman, who still does a fair share of the farm’s tractor work at 94.

This cluster of counties on Colorado’s Western Slope — along with three counties just across the border in eastern Utah — has warmed more than 2 degrees Celsius, double the global average. Spanning more than 30,000 square miles, it is the largest 2C hot spot in the Lower 48, a Washington Post analysis found.

Read the full article “2°C: BEYOND THE LIMIT: This giant climate hot spot is robbing the West of its water” on The Washington Post.