After Wildfires Stop Burning, a Danger in the Drinking Water 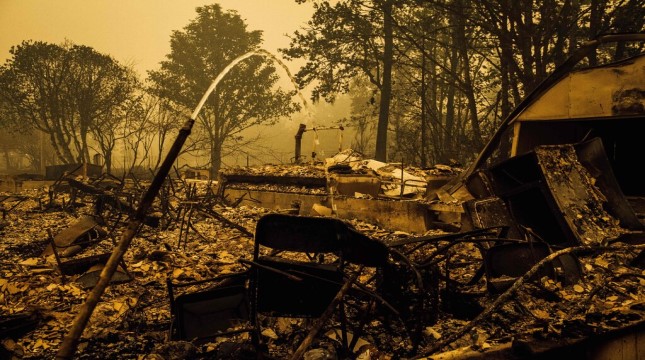 Experts are warning that existing water safety rules are not suitable to a world where wildfires destroy more residential areas than in the past.

Two months after a wildfire burned through Paradise, Calif., in 2018, Kevin Phillips, then a manager for town’s irrigation district, walked from one destroyed home to another.

Burned out cars, the occasional chimney and the melted skeletons of washers and dryers were the only recognizable shapes.

“You started to actually be shocked when you saw a standing structure,” he said.

Mr. Phillips, now Paradise’s town manager, was following the team taking samples from intact water meters connected to homes that were now reduced to gray ash. He knew from the Tubbs Fire in 2017 that toxic chemicals were likely in the water distribution system: Rapid action would be needed to protect people returning to the community from the dangers of substances like benzene, which can cause nausea and vomiting in the short-term, or even cancer over time.

Wildfires, which turned skies a dim orange over cities from Seattle to Santa Cruz this year, are increasingly engulfing people’s homes, continuing to rage in California, Oregon, Washington and Colorado in recent weeks. But even when homes don’t burn, other dangers arise in the aftermath, and experts are focusing more attention on what happens to municipal water systems after a fire, when released toxic chemicals can get pulled into plumbing systems, and other damage can linger in pipes for years.

“It’s hard enough having the pandemic restrictions,” said Angela Aurelia, a resident of Boulder Creek in Santa Cruz County, whose home was partially damaged in August. “And then you have a wildfire, and you lose access to your home and then we can’t even go back home because the water isn’t likely safe to use.”

Mr. Phillips and some others who work to ensure the water flowing into homes is safe say they are following guidelines that are not designed for this kind of disaster.

After a fire, water in houses and in the underlying pipes “can become contaminated with an array of volatile organic compounds and semi-volatile organic compounds” at levels that exceed the regulatory limits set by the state of California as well as the federal Environmental Protection Agency, said Amisha Shah, a water quality engineer at Purdue University. “It’s very clear it needs to be addressed.”

Water flows from a pipe amid the charred remains of a building in Gates, Oregon, in September.