Who in the U.S. Is in ‘Plumbing Poverty’? Mostly Urban Residents, Study Says 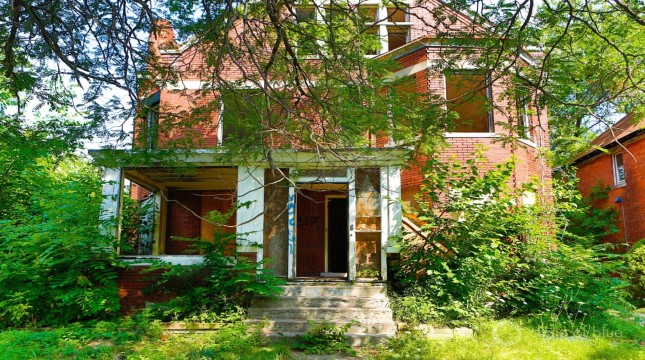 Photo: A house in Detroit where water had been shut off in 2014. Photo © J. Carl Ganter/Circle of Blue

Not everyone in the country has piped water at home. Study authors argue that water access in the U.S. is inseparable from housing and social inequality.

Even in the wealthiest countries, basic water services are not universal. At least 1.1 million people in the United States do not have hot and cold water running water in their house and a shower or tub for bathing, a new study finds.

This “plumbing poverty” is highest in cities and most acute in those like San Francisco that have the greatest income inequality.

Lack of plumbing infrastructure is not limited to those who are experiencing homelessness. Katie Meehan, lead author of the study, said that this is a key insight.

Even though the study found that plumbing poverty is tightly linked with traditional indicators of marginalization such as income and race, Meehan said that other factors are at play. Plumbing poverty is also tied to housing: renters and people who live in mobile homes are more likely to lack complete plumbing services than homeowners.

Meehan said that focusing on these structural issues where there are legacies of discrimination is a way to reframe the problem of water access. Instead of looking at it as a technical matter of building more pipes or increasing supply, Meehan prefers the question of why the pipes were not extended to certain areas to begin with.

“This draws attention away from poor people and to the institutions that produce poverty,” Meehan, a senior lecturer in human geography at King’s College London, told Circle of Blue.

The high number of urban residents without complete plumbing services is an interesting result that runs counter to the typical narrative that plumbing deficiencies are most prominent in rural areas, Meehan said.

Though New York and Los Angeles had the highest number of people living without complete plumbing, San Francisco had the highest proportion of residents in those circumstances. Portland, Milwaukee, and San Antonio also had high relative numbers of plumbing poverty.

Sera Young is an associate professor of anthropology and global health at Northwestern University who focuses on household water insecurity. Young, who was not involved in the study, commended the research for debunking the idea that inadequate plumbing is primarily a rural problem.

“Water security is a concern worldwide, and here in the U.S., we are not immune to it,” Young wrote to Circle of Blue in an email. “Not only is the 1.1 million individuals with plumbing poverty in the U.S. likely an underestimate, the numbers have likely worsened since 2018.”

Meehan concurred that the numbers are most likely an undercount and the results are the “low end” for those lacking plumbing. The data for the analysis came from the American Community Survey, a questionnaire that is administered annually by the U.S. Census Bureau and sent to households. The study used data from 2013 to 2017. The plumbing question currently asks about hot and cold running water and a shower or tub for bathing. The Census Bureau, at the request of Congress, stopped asking whether homes had toilets in 2016.

Stephen Gasteyer, an associate professor of sociology at Michigan State University who was not involved in the study, said it helps to fill an information gap: estimating the number of people in the United States who lack water and sanitation service.

Gasteyer, who researches water access, contributed to a separate report published last year that examined not only water access but toilet facilities. That report, which used earlier Census data that included the toilet question, estimated that 2 million people in the U.S. do not have those services.

These sorts of numerical assessments are only a beginning, Gasteyer said. The next step is to investigate why numbers are high in certain areas and not in others. One of the weaknesses of the Census data, he said, is that it’s not clear why a person says they don’t have plumbing services. Is it because their water has been shut off for several months due to unpaid bills? Or is it because there is no piped connection to their house? Or are they living on the streets but have a mailing address?

“If we’re going to fix the issue, we need to understand what’s behind the data,” Gasteyer said. “We need to do case studies to understand the mechanisms and not just the numbers.”

Gasteyer said that the study’s finding that renters are more likely to have deficient plumbing aligns with his experience doing field work on water access in Mississippi. Activists there told him that it is difficult for renters to hold landlords accountable for inferior service.

Meehan is similarly intrigued by the mechanisms by which plumbing poverty occurs. The Census data provides a broad view but does not explain the process for any particular city.

“Does it tell you how the engine works? No,” Meehan said. “That requires additional research.”